On the occasion of Mathieu Amalric’s new film The Blue Room premiering at Cannes, I present my interview with him from October 2013, when he came to New York City to promote the New York Film Festival screening of Arnaud Desplechin’s Jimmy P. While not specifically about The Blue Room, we discussed Amalric’s approach to acting and directing, which I hope might illuminate his process. This interview has never been published and runs here in its entirety. 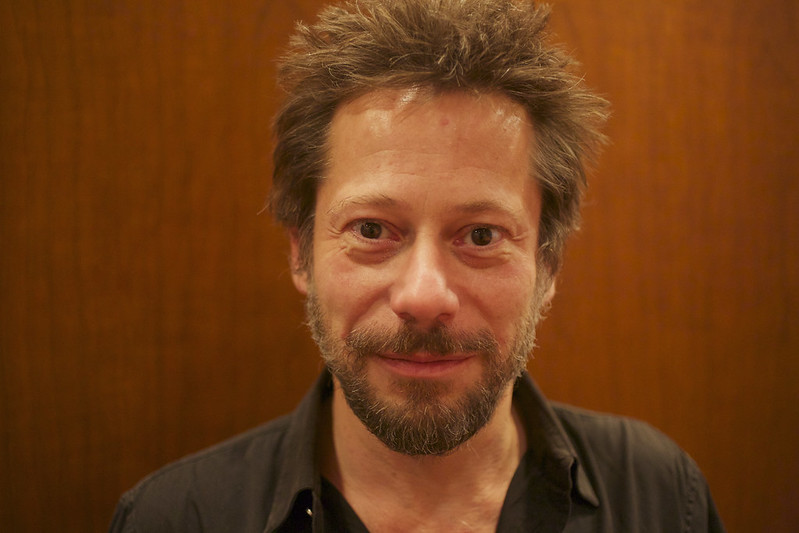 Mathieu Amalric (photo by me)

BRM: Let’s start by discussing how you started the process of becoming an actor.

Mathieu Amalric: Nothing was expected, it was an accident. It was Arnaud Desplechin who invented me, as I always say. It’s true. I fell in love with movies and found my place in movies when I was young. I was 17 when I saw the work of Otar Iosseliani, who never picks actors; only friends or silhouettes. He directs with a whistle; one whistle you stop, two whistles you walk, and that’s it, then he does the sound in post, afterward. And I wanted to do what he was doing, which was to fabricate films. People say they are “Filmmakers”- yes, film “makers”, in English it is more beautiful. It is exactly that, you “make” films. Because it had to do with making with your hands, you head your heart— (gasps in revelation)— I could do anything with it. You never understand anything about life; the older you get, the less you understand and film is just a way to have the illusion that you grabbed something.

So, I was just working as an AD, an assistant editor, working behind the camera and directing my short films. And then Arnaud saw a short film in which I acted, because it was with my grandmother and my father, and he asked me to do some screen-tests for La Sentinelle but he didn’t pick me…

BRM: You had a small role…

Amalric: Yes, but I tested again for Comment je me suis disputé (My Sex Life… or how I got into an argument). Arnaud is an amazing director, especially with actors. The other directors thought that I was a good actor, and I am still living on that mistake. But like all phonies, you have to be very good to be a phony. Like people who do art forgeries; you have to be very, very good. So, I am getting better at false acting.

BRM: Can you describe the process of invention that you had with Arnaud? I am sure the relationship has changed over time, you must have developed a shorthand and trust by now, but at the start, how did he “invent” you as an actor?

Amalric: He told me 10 days before we started shooting that I had the role. For me, it was suddenly “Shit! I should have been better in school and learned my poems, so I had fewer problems with my memory… how am I going to learn all of this?” Because in this film, there was so much dialogue, and it was so precise, and you don’t want to change a word. It has nothing to do with naturalism; in Arnaud’s films, he is working on something else. So, ok- learn your lines, learn your lines, learn your lines— am I going to be able to say my lines not being conscious of what I’m doing?

And Arnaud, who is in love with actors and always wanting to help them, finds this way that you are occupied by tons of things to do at the same time, so that you don’t think that you’re acting, and if you don’t think you’re acting, maybe you grab some truth that belongs to you but that you’re not aware that you’re making. So, Arnaud says something like “Maybe on that line, you take the pen and then you take your cigarette there, and then you go over there.” Ok. And at the start, he would do a lot of takes, maybe twenty or so takes, and after each take he would say “I know what this scene is about, it is about that word, so we’re going to do something else.”

And so, after a moment, you cannot physically do everything he’s given you. And in that moment, something of you is grabbed by the camera. That’s how he works. And that as twenty years ago. Now, and its funny because it was specific to a film like Jimmy P., where something happens between those two men that is never named, but it has to do with friendship. Like he says at the beginning “Sympathy is sufficient… I didn’t help Jimmy because he was an Indian, but because it was in my power to help him.” That is how it is with Arnaud. Complicity, let’s say. 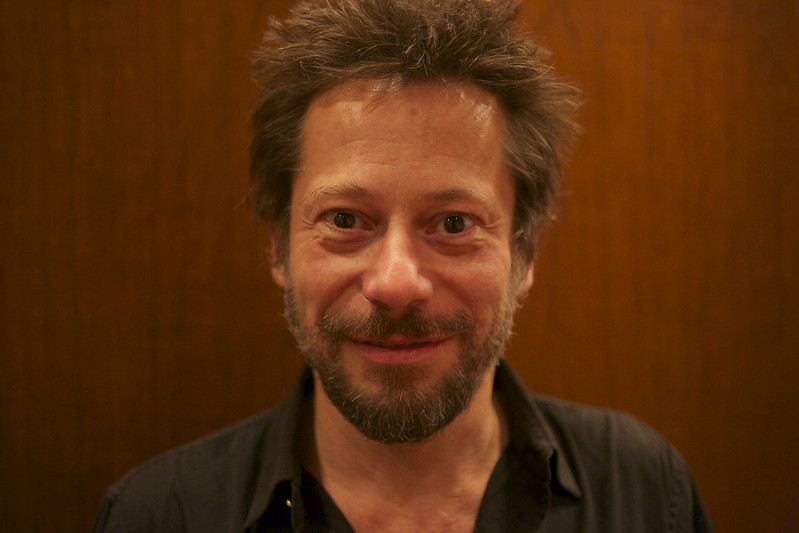 BRM: I spoke to Arnaud about his use of masks, and often in his films, your characters are people who, underneath, are a swirl of contradictions which are always breaking through this mask they are presenting to the world. It has an almost spiritual component, where Arnaud is inventing, on the page, characters who present you with the opportunity to inhabit them and present this contradictory state to the world. Am I wrong about this?

Amalric: No no no… you’re right, and I was thinking when you were talking, that Jimmy P. is really two masks of Arnaud, one that is the Indian and one that is the Hungarian— not professor, because I think what Arnaud loves about Devereaux is that he’s a man who never presented himself as an expert— but there is something where Arnaud believes in humanity, and it is in all of his characters and its always like that. Even in his family films; he is the mother, the angry sister, the banished son. He is a great actor when he directs, he always has to get involved and demonstrate, and he plays the part to see how he would do as a girl, as an old man, as an adolescent. So, that’s why his films belong to everyone, he doesn’t tell people what to think. He wants you to take your own voyage inside all of those characters.

BRM: He also deals with outsiders, who are often set aside by society and convinced they are insane, but really, they are just alive; they’re not really insane. This is a thread throughout the work. Is this something that draws you to these characters?

Amalric: I am never driven to a character, it’s more that I am lucky that these amazing directors pick me and make me their puppet. It’s great! Acting is only abandoning yourself to someone else’s vision of the world. And it’s only afterwards that you discover the change in your perspective, that you’ve been looking at the world one way and never thought it could be the other way. It’s fascinating, it’s passion, it makes life more interesting. And then, when I go back to directing my own films, it helps me a lot.

But it’s true with Arnaud, in all of his films, he is attracted by men and women who are capable of resisting what society expects of them. I don’t think he sees them as victims, but as heroes, as in Howard Hawks films, I don’t know… strong. The women in Howard Hawks films are incredible. They are not victims crying that society set them aside, they are in the center, and they invent their own methods for placing themselves there. It is an act of self-invention; the same as Devereaux in this film, not quite anthropologist, not quote psychoanalyst- he made this new psychoanthropology. But in the end, as an actor, you just try to know your lines, create a credible accent, and you try to be like an athlete, who can do all he wants because he can control his body and be precise. And this film is so much about listening to the other, working on what is being said between the lines.

BRM: Every time I see you in a film he is not directing, I feel like you’re having an affair with the other director. What do you take from working with Arnaud to, say, Julian Schnabel or to the set of a James Bond movie?

Amalric: Every director is very different; what would there be in common…? Hmmm. I try not to arrive with any principles. I am a virgin. It’s true. But then technically, I work hard, but my goal is to be as light as possible for the director, not ask questions, or very concrete and precise questions. It has to do with the state of stupidity, which is very important to have as an actor.

Amalric: (Laughs) Yes, ok, but American actors come ready, and they are difficult to change, they don’t want to be stupid, it’s too frightening. They don’t want to belong to someone else. They did their work on their own, they constructed something else. But stupidity has to do with everything being possible, it’s important. It’s also maybe why directors like to work with other directors, because actors that are only actors can think they believe in the director as “god”— that he will know everything— and they want to be loved, they want to be accepted, so there’s a lot to do with psychological seduction and taming. When you’re a director, you know the solitude of the director and you know that he feels he is pretending to know everything when in fact he simply hopes the toilet is nearby because it is so scary. So, you try to be generous and listen to the music and rhythm of the performance. The reason movies are so fun to do is because they are a collaboration, you feel like it is an orchestra with a common tempo. 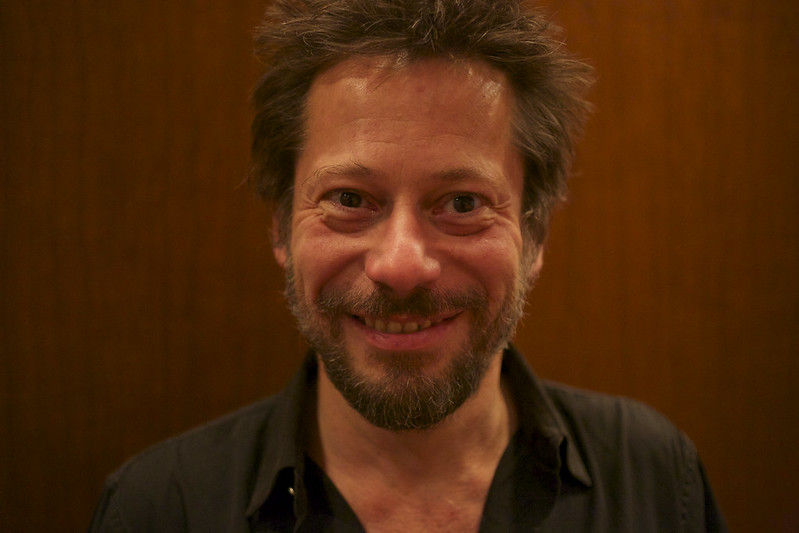 BRM: You also direct… how do you work with other actors then? You’re entrenched in the filmmaking community in France, everyone seems to know everyone else…

Amalric: I’m part of them, so it’s natural. I know how it is. I know directors who have never acted who somehow think actors are miracles, you have to say the magic words to open them up, or like a romantic relationship. Directing goes through the body, a way to move on set. It’s not the words. Acting is another handcraft, which is why I love movies. That’s why I think it has nothing to do with being an artist; we’re not painters or writers or musicians. Movies are like a circus, more impure, you just try to do what you can, and it is never what you dreamt of. You have to manage reality. And I find that way more freeing than staring at a blank page and you have to invent the world everything is possible. in a movie? Nothing is possible. So, we struggle and you hope a little miracle happens.

BRM: Jimmy P. is Arnaud’s first film in America, and as a lover of cinema, can you talk about shooting this film here together, a period film that draws on the American landscape? It really draws on the history of American film.

Amalric: Not acting in your own language brings its own challenges, but then there is this way of making each word precious. Words, when you work in another language than your own, are precious. And it also has to do with exile; two men who are trying to become Americans. Yes, there is something about the history of the construction of this country, the dream, the acceptance of different cultures. For us in France, racism is a problem in this regard. We have this sickness everywhere else in the world; identity. For America, it’s not the same problem, everyone is from somewhere else. American cinema, too.